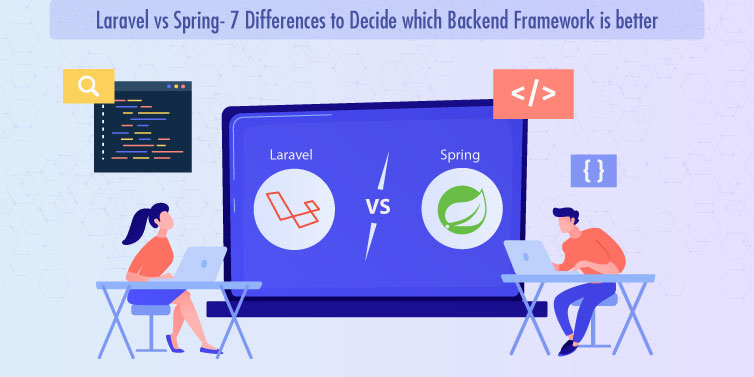 Laravel is a web application framework with elegant syntax and expressive. We believe development must be an creative, an enjoyable  experience to be truly fulfilling.

Laravel is free to use. A php mvc framework. It Includes Arts & Entertainment, Computers Electronics & Technology, Law & Government, Science & Education and 20 other categories.

Laravel is an open-sourced web application framework created by Taylor Otwell in 2011. It is written in PHP. It follows the model-view-controller(MVC) architectural pattern. Laravel is known for its server side templating, routing handling, HTML authentication and more. It is a server-side-based framework, you may build on-demand streaming web apps, SaaS based web apps, multilingual CMS system, e-learning web apps and stock trading based web management systems.

Barchart, Laracasts, Neighborhood Lender, Asgard CMS and World Walking, are some of the popular apps developed with laravel.

Spring is also free to use. Spring is widely and popular deployed open source framework. It helps developers to build rich quality applications.

Spring is leading mainly in Finland.

Spring is a lightweight and an open-source and framework. It is used for developing Java-based enterprise applications. Spring made a safe environment for programming in Java. It’s frameworks and modules are used to deliver desired performance, security and streamlined development exercise. Houghton Mifflin Harcourt, Spotify and Netflix are some of the popular apps built with Spring.

A Comparision between Spring Vs. Laravel

It follows the Model-View-Controller architectural pattern. It also provides the ability to divide developer roles for a comfortable development process. In simple words, where frontend developer is working on the views, a backend developer may be working on the controller logic simultaneously. It may improves the app’s SEO. It also eases the implementation of external APIs and reuse of app logic.

This framework delivers high-performing apps because of the MVC module which may explains the difference between app view, model, controller to reduce the complexity among multiple app modules particularly in larger applications.

Also the flexibility of framework improves as developers may use set of tools and libraries tools. The optimized heap usage and startup time make Spring apps more user-friendly. Spring uses, fastest servers like Tomcat and netty which can improves app performance.

Performance of laravel-based apps may have implications on success of project. It is supposed to be moderate.

With spring, you may build scalable apps due to its flexibility and parallel processing capability. It reduce app downtime despite newly added features. Also the framework is highly performant  and configurable.

By selecting a load balancer and good database laravel may achieve big horizontal scaling. Laravel apps may be scaled by using AWS, MySQL and some modern caching methods.

It specializes in configuring external components and monitoring different components at a time. It may eliminates configuration challenges associated with microservices. It also provides a compatible environment for microservices development.

To work with database technologies like Object relational mapping and No SQL databases spring framework offer a compatible environment.

There are no limitations to create a wholly controlled relationship between web app and database.

Spring framework is popular among Java developers. It has community from entry level to experienced developers.

Laravel has 63.5K Github stars, more than 46K active users and 18K threads. Due to its vast community, maximum time taken to resolve query is not more than three days. It’s powerful community share laravel repositories, podcasts, news, documents, and so on.

When to Choose Spring?

Both frameworks have involved with every technological update and the developer community has increased along with them.

How big is the community around Laravel?

PHP holds some parts of the market when it comes to server-side programming of web applications. Laravel has a vast community with more threads, active users, real-time watchers and Github stars.  Laravel and Php combined have a powerful community, where developers share Laravel repositories, news podcasts and documents etc. Following are some of the places where you may meet the Laravel community:

How big is the community around Spring?

The Spring framework is mostly popular in Java developers. This extends its support from entry-level to experienced developers.

Here are some list of useful platforms for questions related to Spring:

Laravel vs Spring- Ease of Testing

High load and growing market expectations, your application development project needs to go through a series of tests to ensure compliance with the usability, compatibility and UI standards. Here’s how Spring and Laravel out when compared with testing.

How much easier is it to test a Laravel app?

It also includes the ability to conduct mock tests by mocking application codes and events.

How easier is it to test Spring applications?

It is necessary to identify the team size before you start the development. That will help you plan and to decide based on the cost that might be incurred in sourcing or hiring developers.

How convenient is it to hire Laravel developers?

You may almost find a Laravel developer in every corner. It is necessary to keep in mind that rookies might find it challenging to handle its advanced features. Hence, the ones you hire must have the know-how of handling caching, Artisan and Eloquent ORM.

How convenient is it to hire Spring developers?

New Jersey, California and Texas are among the highest paying states for Spring Boot/Spring developers while Virginia, New York and Chicago offer the most Spring developer jobs.

This average pricing can differ from country to country depending on the contract between two parties.